CaSh – Catalysis under the Sheets

Research project selected under the 2019 call for proposals 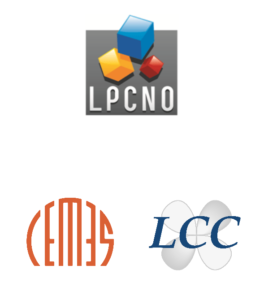 The effects of confinement in heterogeneous catalysis have been the subject of particular attention since they can affect catalyst activity, selectivity but also stability. Indeed, reaction energetics, mechanisms and dynamics could be significantly altered inside the pores of 1D (one-dimensional), 2D or 3D materials.

The CaSh project will focus on 2D confined nanoreactors created by combining together noble metal nanosheets, recently prepared by the LPCNO, and graphene sheets. Ligand exchange between the native ligands of the metal sheets and graphene, which can be considered as a macromolecular ligand, will be employed for the elaboration of catalysts, which will be tested in reactions involving small molecules, (H2, O2, CO) in order to investigate confinement effects resulting from the formation of 2D nanoreactors. (see figure)

The methodology to be followed by the CaSh project partners involves: i) the preparation of the catalytic systems; ii) the fine catalyst characterization by several techniques; iii) catalytic screening and iv) the integration of modeling in order to better understand different aspects of confined catalysis on activity, selectivity and stability.