NAMAS – photoconductance of gold nanoparticle assemblies : from NAno to MAcro-Scale 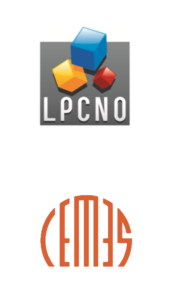 Research project selected under the 2021 call for proposals

The project is centered on a research topic at the interface of charge carrier transport and optical properties of hybrid nano-structures composed of metal nanoparticles coated with organic ligands and self-assembled on a flexible substrate. The main idea of the project is to investigate both experimentally and theoretically the fundamental mechanisms of photo-current generation and relaxation upon optical excitation of the surface plasmons supported by the interacting metal nanoparticles. The use of a flexible substrate will provide a mean of controlling the separation between the nanoparticles in the sub-10 nm gap regime and hence their electro-magnetic interaction as well as the electron tunneling between the NPs. Tuned laser excitation, combined with electric impedance spectroscopy, will permit to selectively excite the surface plasmon resonance and at the same time determine both the resistive and capacitive characteristics of the photo-current and their frequency dependence. A challenging goal of the project is to bridge the gap between the local phenomena (localized surface plasmons, electron tunneling, molecule/metal states hybridization) and the meso/macro-scopic effects (percolation, structural disorder, size and distance fluctuations) involving the entire NPs assembly. The project aims at establishing a clear connection between the elementary nano-circuit formed by neighboring NPs and the macro-circuit formed by the NPs assembly.