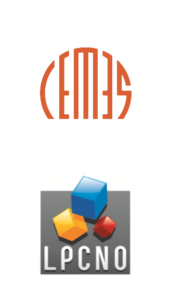 Research project selected under the 2019 call for proposals

Magnonics is an exponentially growing topic in magnetism that relies on the possibility to manipulate spin waves (or magnons) to propagate and/or encode information, making possible logic operations. As compared to other technologies, spin waves based devices offer several advantages and in particular very low energy dissipation.

Despite the great potential offered by magnonic devices for microwave applications, a prerequisite for their industrial development is their integration at nanoscale, typically under 100 nm, in order to be compatible and/or to compete with CMOS technology as foreseen in the IRDS 2017[ ]. However, at such scales, spin waves properties are different from bulk because of confinement effects or geometrical, structural and chemical inhomogeneity. Therefore, direct imaging of the magnetization dynamic in relation with the initial magnetic state in “real” micro and nanostructures has become a crucial technological and fundamental issue. At the state of the art, very few techniques allow achieving this and their spatial resolution is generally not sufficient to study nano-objects with dimensions below 100 nm. Up to date, the best technique is X-ray transmission microscopy (requiring synchrotron facilities) which gives a spatial resolution of few tens of nanometers.

The main objective of the SWIME project is to develop a new characterization tool based on electron holography to map spin waves, and more generally magnetization precession, in the microwave range, for individual nanostructures, with a spatial resolution down to the nanometer. For this, we will use electron holography in a quasi-static regime to map the magnetization precession. One of the major point is the possibility to correlate the mapping of the spin wave modes with the equilibrium magnetic state and the structural and chemical properties of the nanostructure. This innovating method will be a breakthrough to get the full characterization (frequency and space) of the spin dynamics in complex geometries relevant for magnonic and spintronic devices for which the magnetization can strongly be non-uniform (magnonic crystals, pillars, nanowires, skyrmions, domain walls etc..). It will also bring new insight to address fundamental issues such as spin wave attenuation, self-focusing, interference or transmission through interfaces, which are building blocks of spin waves based communication devices.